Buying an LED strip may seem a straightforward task, but there’s a lot that you need to know to buy a perfect strip. Otherwise, it can ruin the whole setup if you buy the inappropriate LED strip.

For example, if you are looking to buy an LED strip for outdoor purposes, then it needs to be waterproof or else the strip will have a short lifespan. Similarly, if you want a high brightness LED strip for your room, then you should go with the high-density strips that have an array of 60 LEDs per meter.

There are many factors like these that one needs to take into consideration before buying an LED strip. But you need not worry because we have shortlisted best RGB LED strips for you after considering all the factors. 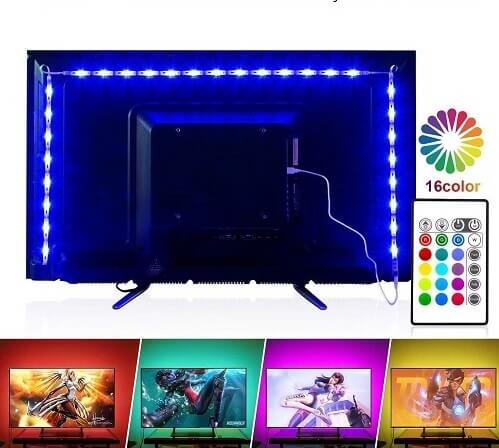 If you are looking for the RGB backlight for your TV, then this LED strip from Pangtonvilla is the best choice. This strip is 6.56 ft in length which makes it perfect for TV size ranging from 40-60 inches.

You can create a unique ambience at home after installing this backlight on your TV. Moreover, it produces a color-changing effect on the background that improves the picture quality and reduces eyestrain.

Also, you get 16 different color-changing modes on this LED strip which is a great deal at this price point. To change the color modes you get a 24 key infrared remote control that has a control range of up to 19 feet.

Apart from that, it is very easy to install this backlight LED strip on your TV. All you need to do is peel off the adhesive film from the strip and stick it to the back of the TV. For your reference arrows are drawn on it, you can follow the marks to successfully install this strip on your TV. But, before installing, make sure you dust off all the dirt from your TV or else the adhesive may not stick properly.

This strip works on 5 volts DC and you need to connect it to the USB port of the TV to light it up. The good thing is that it automatically turns off when you turn off the TV and lights up as you switch on the TV. Overall, it is a must-have product if you are looking for a good backlight for TV.

Can only be used on USB support devices 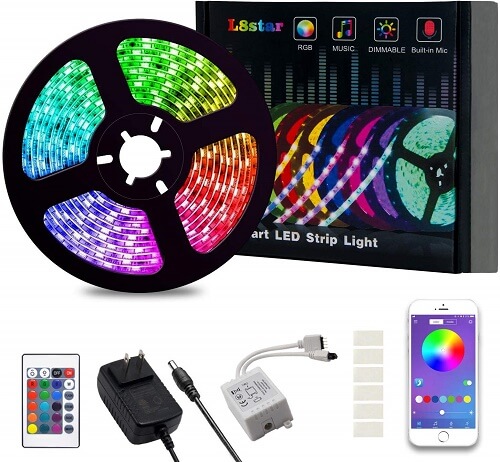 This L8star light is a high density LED strip that provides a very bright light. Also, unlike the previous LED strip, it can be used for a lot of purposes like home decor, party, etc. It is a 16.4 ft color changing rope with dimmer and brightness controls.

The best thing about the MagicStrip app is that you have complete control of lights from your phone. Also, you can enter the music and mic mode on the smartphone which then allows the lights to sync with the music and your voice. Once the lights sync they will change color with the music beats. It overall creates a stunning party scene.

It is a great indoor LED strip that you can use to decorate your room, desk, PC, kitchen, etc. However, since these strips are not waterproof, you can not use them outdoors and that’s the only downside of it.

Can be controlled with a smartphone

Can be cut into multiple strips 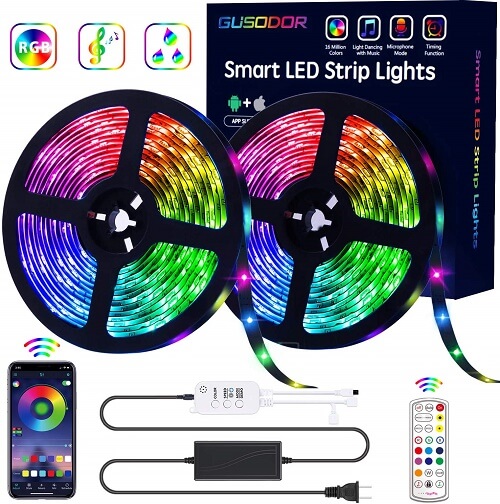 If you want a long strip of LED lights then you can go with this product. It’s a complete strip kit from Gusodor where you get two reels of 16.4 ft LED light strip which you can combine to make a full strip of 32.8 ft length.

You can sync this LED light to your smartphone by downloading the Lotus Lantern Android or Lotus Lantern iOS app. The only requirement is that your phone should support Bluetooth 4.0 or later version. Once you download the app, the light automatically connects to the app. You can also control the lightning with the IR remote control you get in this kit.

It is a smart light that supports a lot of modes like color, style, music, mic, and timing.  Once your phone is connected to this LED strip, you can control all these modes right from your smartphone. The music sync mode was present in the previous LED strip as well but the USP of this LED strip is the Timing mode. In this mode, you can schedule the Lights On/Off timing.

Another great thing about this strip is that it is completely waterproof which means you can use it outdoor as well as indoor. Also, you can cut the strip at an interval of 3 LEDs so that you can adjust and install this LED strip accordingly.

Supports a lot of modes including music and timing 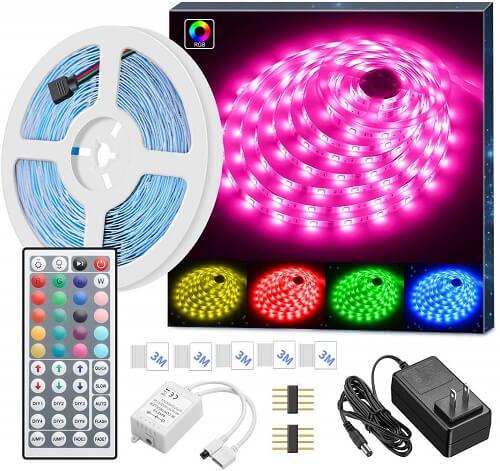 This RGB LED strip from Minger is another good option to go with if you want a high brightness LED for decorating the indoors. This LED strip is 16.4 ft in length and supports dimmer and brightness controls.

To control the LED you get an infrared remote control in the box. However, there is no app control available in this LED strip as we saw in the previous two LEDs. But the good thing is that you can customize the lighting effect on it according to your mood.

You get 6 DIY color modes on this LED strip that allows you to do the customization. Other than the DIY colors you have 20 basic colors along with 6 lighting modes that ensure you get the best lighting effect.

Also, it is very easy to install this strip to any corner of your room because it bends easily. However, this strip is not waterproof and hence you should use it to decorate indoors only. But, you get a 12V AC adapter that comes with a short circuit protection feature that increases the lifespan of the LEDs.

LED is not waterproof 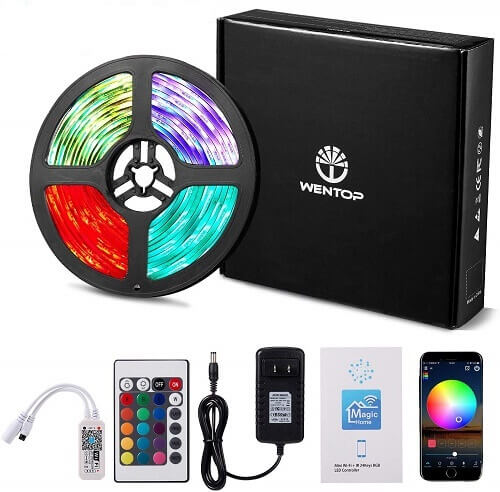 The last but not the least product on our list is the WenTop waterproof LED strip. As the name suggests it is an IP65 waterproof LED strip that means you can install it indoors as well as outdoors. It is a 16.4 ft strip, and to light it up you can use the AC adapter you get with this strip.

Also, the adhesive on this strip is very strong and it won’t get weak during operation. It is specifically designed for good adhesion to surface like plastics, paints, and glass. Also, it is easy to install this strip anywhere you want to like your room, kitchen, under the cabinet, etc.

Other major features like music and voice sync along with timing function are also available in this LED strip. Overall it’s a must-buy product and you should definitely go with it if you like smart gadgets.

Has music sync and timing functionalities

This was our list of the best RGB LED strip and we hope you like it too. But before buying an LED strip make sure the purpose for which you want to buy it and then choose the strip wisely. All the LEDs on this list are RGB but you can also buy any other color LEDs if you want. 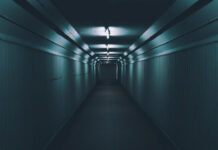 At SpecsTalk, our aim is to provide the best products so that you don’t waste money by buying the wrong products. The list of best products is created only after doing extensive research which covers the technical as well as non-technical aspects.
Contact us: admin@specstalk.com

Some of the pages on this website are having affiliate links. When you buy product through those links, we may earn an affiliate commission.