RC Submarines, just like any other RC boats are a great way for recreational activities. But there is more you can do with an RC submarine especially if it has a camera built-in. If you are into oceanography or just like capturing aquatic life then these RC submarines are more than just toys for you.

If you are not interested in capturing aquatic life but fishing is your hobby. Then also you can go with these remote control submarines. As they can help you find aquatic animals with the help of the HD camera and real-time streaming feature.

The Poseidon submarine is one of the best underwater submarine available today. This submarine comes with a full HD camera with a 120-degree wide angle lens. That can capture videos and images in 1080p resolution. The best part is that you can view those videos and images in real time on your smartphone. The videos are recorded in 30FPS and live streamed with 2.4 GHz frequency on your connected device.

You don’t get a controller with this submarine as it comes with a WiFi buoy that connects to your smart device over WiFi. By using the Geneinno Android app and Geneinno iOS app, you can link the WiFi buoy with your smart device to control the submarine and view real-time streaming (FPV) on your device’s screen. The Poseidon underwater drone is basically a Static deep diving submarine that uses a ballast tank to sink into the water. A high-end RC submarine has a ballast tank that stores water to control its buoyancy.

The submarine comes with a 328ft tether which allows going deep down underwater up to 394ft. The battery life on it is also unbeatable as you can get up to 5 hours of runtime for just 2 hours of charging. It also has an array of sensors inbuilt. For instance, built-in posture and self-balance control sensors along with depth and temperature sensors which are accurate up to +/- 0.2m and +/-0.5℃ respectively.

If you are new to RC toys and want to start your RC journey with a submarine, then this Silverlit spy submarine is the right choice for you. This submarine is ideal for your bathtubs and freshwater fish tanks. It has a VGA camera built-in which can capture video at 640×480 resolution and images at 1280×960 pixels. However, no real time streaming is available on this submarine. It comes with a detachable feeder arm which you can be filled with food to feed the fish and get close images and videos of the fishes.

The submarine comes with a basic 3 channel infrared remote control. The controller has the transmission range of about 5ft and depth of 4ft respectively. However, if the submarine goes out of the control range, the motor stop working and it automatically floats to the surface. It has 2 built-in LED lights so that you can capture the images and videos in the dark as well. The submarine runs on electric power for which it requires AA batteries which are sadly not included with it and you have to purchase it separately.

If you are looking for a budget-friendly RC submarine with camera, then this submarine is what you should look at. This submarine is manufactured in China and the targeted age is 10 years and older. It has a 30MP camera that can take some good videos and images underwater. You can download the images and videos on your computer with the help of USB cable provided in the box.

The storage available for shooting underwater is only 256MB. So, you have to erase the memory every time to allow new recordings. It has a pretty basic infra-red controller which has a transmission range of 7ft. It takes 2 AA batteries to power up this submarine which are not included in the box but you can get them from a store near you. 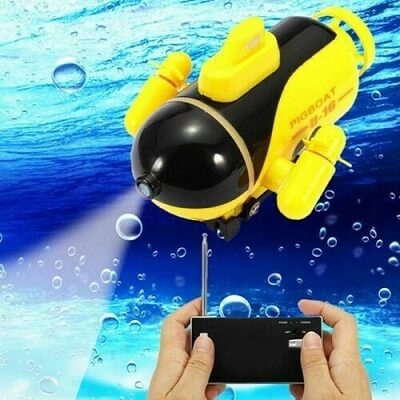 If you are looking for something cheap, really really cheap then Underwater Drone RC is something you should go for. This submarine is inexpensive as compared to the other products, even then it offers quite attractive features. The submarine comes in 3 different colors, blue, yellow and green in which it looks really eye-popping.

This RC Submarine can be a perfect choice if you are looking for something your kids can play with. You’re a pool lover? Well take it with you and enjoy the summers like never before. Underwater Drone RC comes with 2 propellers, providing it a decent speed in the water. Along with the camera, it also has 3 searchlights on the head. So your kids can also play the treasure finding games in the pool.

Obviously, with the remote control range of only 6 meters, you can’t take it to the rivers and oceans. But you can leave it in the large-sized fish tanks and take a small glimpse of the aquatic life. Everything about this submarine is awesome, except one thing. It takes 12 minutes to charge completely and only lasts 7 minutes in the water.

The PowerRay wizard is one of the best RC submarines with a camera to capture high-resolution pictures and videos. It is a high-end RC submarine that can be used for exploring, studying marine life, and mapping. It has a 4K UHD camera that can take video in 1080p resolution with the real-time streaming feature. Also, it can take pictures in 12 MP at 5-FPS burst mode, which allows you to take continuous pictures in quick succession.

This is a great RC submarine for someone who likes exploring fish as it has a power seeker fishfinder mode that allows you to find fish even in the deep waters. It also has a bait drop line so that you can catch a fish with it. Apart from this, this submarine also runs on salt water as well.

This submarine has a non-removal battery that can give you a runtime of 2 hours at a full charge. Also, it has 2 lights on the right and the left side of the camera with adjustable brightness. It also supports VR goggles so that you can see the underwater world with a whole new perspective. Also, it supports the lock on depth feature that allows it to hover over a particular point to take still photos and videos.

Here in this article, we have provided you some of the best RC submarines that you can go for. The camera quality on these submarines depends upon their budget. If you want high definition clarity in your videos and images then you can go with the more expensive ones. So, you have almost all kinds of RC submarine with camera here, from deep diving to long run time and the one which runs on salt water even. 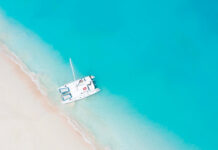