“I could simply snap my fingers, they would all cease to exist.”

-Thanos, the most powerful Titan

For years, Marvel has produced one dramatic movie after another, catching the attention of its audience. In 2018, when Thanos came with his grand plans for the observable universe, all hell had already broken loose! All these films are characterized by an impeccable bad guy, extraordinarily dedicated heroes and an array of artefact that sticks on.

From the first arc reactor to keep the shrapnel out of Tony’s heart to the tesseract, sceptre, aether and such objects encasing the Infinity Stones, Marvel is riddled with objects of desire and extraordinary power.

The infinity gauntlet housing the infinity stones is the most powerful tool in the universe. Thanos intends to use it to snap half of the universe out of existence! Such immense power requires an object of immense grandeur to wield, and an Infinity Gauntlet is just that. 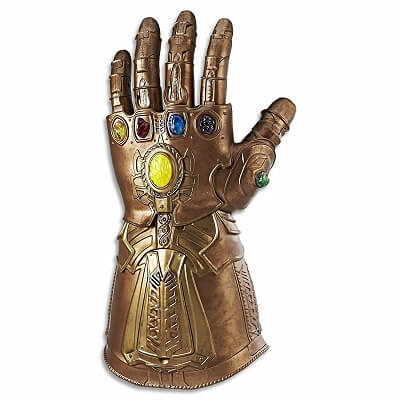 Amazon brings the Marvel Legends Series Infinity Gauntlet. It can be put on by kids in their happy, imaginative games or by cos-playing adults, to ace that costume party.

Crafted with the same finesse as the dwarves of Nidavellir, the Legends Series Infinity Gauntlet has all that the real gauntlet features. This gauntlet is a giant, life-size 19.5” tall and is designed for the Titan within you. The stones are designed separately and most intricately. Not only that, it is also made to produce unique sounds effects from the movie and singular FX effects.

This electronic fist Gauntlet has 6 different stones indicating the Space, Reality, Power, Soul, Mind and Time stones. The stones are so mounted that it is very crafty and attractive to perceive. Features unique and individual sound, lighting and FX effects. The gauntlet comes with an instruction manual that tells the user how to control it for the various effects.

The gauntlet is equipped with articulated fingers for ease of use to hold, grab and snap like Thanos.

Crafted from plastic PVC material which is light in weight and easy to maintain. Such intricate detail to craftsmanship has been paid that this gauntlet can very well become a collector’s edition.

Another best Thanos infinity gauntlet toy by BengPro can be used for children’s fun games, for the next Halloween party, or even for the costume party. It can be bought for personal use or as a gift. This set is so realistic in looks that it will make one look as vivid and gruesome as the real Thanos.

The glove is made from PVC. The stones are ingrained with LED lights that glow, giving off an aura of great power and imminent doom.

Batteries included in the box

The mightiest and the most powerful object in the galaxy is brought to earth by Amazon through the SupmakerThanos Infinity Gauntlet. Now, not only the almighty Supreme Being Thanos can wear it, but even you can wear it and wield its immense powers. This gauntlet is not run by the energy of the stones but by the judicious use of batteries.

The gauntlet is designed exactly like the gauntlet that was featured in the Infinity Wars movies. All the same designs and all the same etchings are implemented on this Gauntlet to make it look as real as possible, and indeed the effects are quite satisfying. It is loaded with all the infinity stones- Reality, Space, Mind, Soul, Time and Power stones in a careful replication of the original Gauntlet. The stones do not possess the immense power as depicted in the movie but are equally fancy as in the movie.

This gauntlet is fabricated from high-quality PVC which does not emanate any foul odour. Can function as multiple articles ranging from being a toy to an ornament to a cos player’s dream! Also serves as a standard item for gifting to an ardent Marvel fan.

This Marvel Infinity Gauntlet toy is lightweight and weighs only 15.2 ounces. The design of the fingers is such that it allows movement and manoeuvring the fingers. The stones are fixed with high precision such that they do not possibly come off after several uses.

This gauntlet is not at all a very good fit for the adult hands and is perfect only for kids or adults with small hands.

Not a good fit for adults 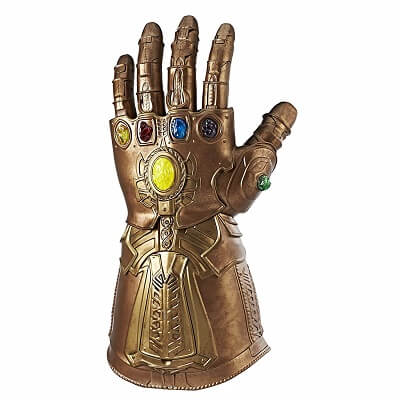 Another Thanos Infinity Gauntlet electronic fist which is available on Amazon is a really cool toy for children and cos-players. Designed to the same precision as the dwarves of Nidavellir, the Legends Series Infinity Gauntlet is a charming representation of the most powerful object in the Universe.

This gauntlet is given an innovative design with articulated fingers. This allows the fingers to be moved about and manoeuvred to a certain extent and allows the wearer to form a fist or to snap, just like Thanos! Not only is the design and make of this Gauntlet is of a superior kind, but the stones also pulsate when glowing giving off an all-powerful feeling. This Infinity Gauntlet is so life like that it will be a disappointment at times that its full powers cannot be accessed.

The movie has wonderful sound effects and this gauntlet uses some of them on the press of a button. Now it is possible to get the grand sound effects pertaining to the use of stones! Sometimes the sound effects are not played according to the instructions manual.

The gauntlet makes use of 3 pieces of small AAA sized battery to function. But the batteries required to run the Infinity Gauntlet are not included in the package. The Thanos Infinity Gauntlet can serve as a battery-powered electronic fist.

The glove has been crafted solely from the use of high-quality PVC which comes with no smell. The inside of the glove features a plastic crossbar. This allows the palm to rest upon while the fingers control the articulated finger design from within by means of rings.

Gloves make it ideally suited for users with long fingers. 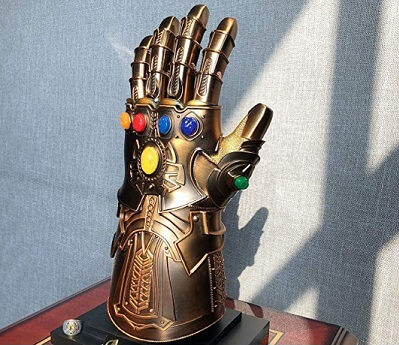 Unlike other gauntlets on this list which are made up of plastic, this Infinity Gauntlet endorses a full metal design. The exterior material is made up of aluminium alloy while the interior is made up of Silicon rubber.

The inner silicon rubber coating makes it easy to wear and move your fingers. Not just that, you can even snap your fingers to wreak havoc just like the mad titan did in the movie.

Moreover, it comes with 6 magnetic detachable infinity stones that are made up of soft plastic. Each of these stones have a LED chipset inside which lights them up. These stones get their power from small button size batteries (CR927), which comes in the package.

Not just batteries, you also get a wooden stand for holding your gauntlet when you are not wearing it. Also, as a token of appreciation, you receive the Thanos ring as a special gift in the package itself. This gauntlet is an exact replica of what you saw in the movie and fits perfectly in the hands of an average adult. 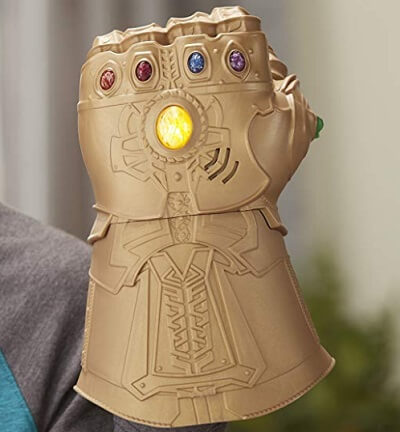 This infinity gauntlet may not be the exact replica of the gauntlet worn by Thanos in the movie but still its a cool toy for kids. Most importantly it is designed in a way that fits most kid hand sizes. Wearing this, a kid can imagine himself controlling the galaxy just like Thanos.

Moreover, kids can push the center button on the gauntlet to activate the mighty FX sound and light up the center stone. It uses 2 AAA batteries for lighting and producing the sound which are included in the package. Also, the fist is made up of hard plastic material and is quite sturdy.

Only center stone lights up

Finger does not move

With a snap, Thanos may have wiped out half of the eternity but had won billions of hearts worldwide with being the ultrapotent supreme being. The Infinity Gauntlet that this master villain was wielding is an article of desire among the ardent Marvel fans and is brought closer to them by various creators. By the efforts of these makers, the gauntlet is literally now at the tip of the fingers for Marvel fans.

As Amazon is riddled with various gauntlets produced by lots and lots of different makers, we have presented the best Thanos Infinity Gauntlets that are available on Amazon.

The 5th one in the list, Marvel Legends Series Infinity Gauntlet, is one that stands out among all others. It has not only been crafted with exceptional designing skills but also has light and full metal body and also has good ratings on Amazon. Much like this one, the 4th one in the list is another fascinating article that is perfect in its make and functioning. This Infinity Gauntlet too is a fascinating buy for the super excited and devout Marvel fans.