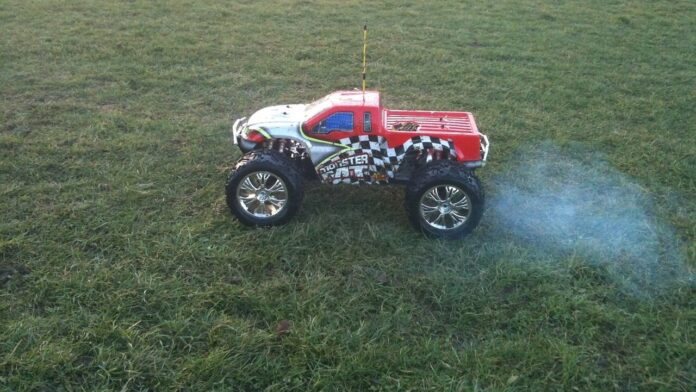 As we keep hearing that one should have some spare time to spend outside, RC cars seem to be the most fun activity for that. New and amazing RC cars are yet again ready to draw children and adults far from the confinement of their homes and their smartphones.

There are different RC car types depending on their built, size, and functioning. If you are keen on trying different types of RC cars, this article won’t disappoint you. We are going to compare 3 types of RC cars today that run on different fuels.

Here are some parameters we will examine when comparing Electric Vs Nitro Vs Gasoline RC Cars.

Before the face-off on different parameters, let us learn a few things about these cars first.

Types of RC Cars By Fuels

Electric radio-controlled cars have a simple design in comparison to other RC types and are also available in much cheaper options. They run mostly on recharged lithium batteries with the help of an electric motor instead of an engine. There are hobby-grade electric cars that are powerful but toy-grade electric cars are the most popular because of their appeal among children and are sold worldwide.

Nitro RC cars run on Nitro fuel with the help of a tiny engine. Nitro fuel is a combination of nitromethane, methanol, and oil. The built design of these cars is more complex than electric RC cars and that is why these cars cost more than them. The speed they offer is impressive but they are a bit noisier too.

As the name suggests, these cars run on gasoline but like Nitro fuel, here too you have to mix oil. Gasoline RC cars are bigger than the above two types and are only meant for large spaces like race tracks.

They are the more expensive RC cars but some of their features are inferior to Nitro RC cars. We will know that all in detail in their comparison between Electric vs Nitro RC cars below.

Electric Vs Nitro Vs Gasoline RC Cars: Head to Head

All these types of cars have distinct features. We will now look at the differences and similarities between electric, nitro, and gasoline radio-controlled cars.

Nitro RC cars are usually similar in size to electric RC cars. But gasoline or petrol RC cars are the biggest in this slot. The most popular scale in nitro and electric ones is the 1/10 scale. Gasoline cars on the other hand, mostly come in 1/5 and 1/6 size.

There are many exceptions to the numbers above as RC car companies across the world keep on experimenting with the size. There are tiny electric RC cars that are available in 1/28 and 1/64 scale sizes. Such smaller sizes are not found in Nitro or the gasoline versions because they have to accommodate a complex operational system including the engine.

Electric RC cars use the motor for running which in turn needs to be powered by batteries. There are two types of motors used in these cars i.e brushed motors and brushless motors.

The principle on which these motors run is the same. The power supplied by the battery creates a magnetic field through motor winding and the magnets are repelled and attracted. This forces the shaft to rotate and that causes the rotor to turn. The brushed motors are cheaper but less efficient than the brushless motors.

Gasoline and Nitro cars on the other hand have an engine to make the car run. Gasoline engines have electronic ignition systems that use spark plugs to ignite the fuel. Nitro RC cars use glow plugs as the ignition source.

As electric RC cars run on rechargeable batteries, they are the cheapest in terms of running cost. Once you have purchased the vehicle there is no further running cost except the electricity you are going to use in recharging the batteries.

You can buy extra batteries so that your racing fun is not ruined midway. The cost of these batteries depends on the brand and their mAh capacity.

The running cost of gasoline RC cars is lower than Nitro RC cars as gas costs less than Nitro fuel. After or before racing, the Nitro car drivers need to get their vehicle, especially the engine tuned. Gasoline RC cars do not require tuning often.

These things depend on the capacity of the motor or the engine and battery or fuel tank in your RC cars. But we will give you a rough estimate here.

If we look at an overall winner in terms of speed, it is clearly the Electric RC cars whose many decent models can go above 60 mph. Traxxas XO-1, one of the fastest RC cars can reach the speed of 100 mph at times. However not all electric RC cars are that fast. Most low-ends can also provide speed around 20-30 mph.

The range of high speed by nitro cars is around 35-60 mph. They are heavier than electric RC cars and that’s why come with more stability. The gasoline or petrol RC cars are slower than the Nitro ones. You can get a top speed of 40 to 50 mph depending on your engine capacity.

Gasoline RC cars might be losers in speed but when it comes to running time, they are much ahead of the other two. Though a fuel tank can be bigger or smaller on average they can give a run time of 40-45 minutes. The Nitro RC cars will provide you around 25 minutes of running time and the electric ones depending on their battery capacity deliver anywhere between 15 to 30 minutes.

There are different prices for different RC Car brands and different models but generally, electric RC cars are much cheaper than Nitro and Gasoline RC cars. This is because the later ones house superior technology and better design.

The toy-grade RC cars’ price starts from $20-30 and can go up to $200-300. The hobby-grade electric RC cars can be purchased for $500 and beyond too, depending on the design and durability offered.

Nitro RC cars normally start from $250-300 and can go higher than $1000. Gasoline-powered cars are much more expensive than these two and the price range starts from $800 and can go up to $3000 to $5000. It is very rare to find assembled gasoline cars and the professionals buy an engine and build an RC car around it using tool kits. But the parts used for making the car are also expensive.

Electric cars are mostly made up of plastic material, especially toy-grade ones. You will find hobby-grade electric RC cars made with good quality plastic. Their chassis and few other components are made up of carbon fiber to give them extra durability.

Electric RC cars can not use metallic bodies because they need to be lightweight. Their engine isn’t that powerful to carry the heavy metallic body.

The Nitro and Gasoline models, however, use anodized aluminum for chassis and most of their body parts. As the engine in these cars releases a lot of heat while racing, using plastic is out of the question. The Aluminum metal works as a heat dissipator and keeps the car cool.

You must have made assumptions about the durability by now and they are mostly true. Durability differs from model to model and brand to brand of these cars but the metallic chassis and body of Nitro and gasoline RC cars make them stronger than electric RC cars.

But many electric cars come with waterproofing to be used in wet terrains. You will rarely see that with Nitro and Gasoline-powered RC cars. We would advise you to go through the reviews before purchasing any individual model of these cars.

As we have discussed earlier, the Nitro and Gasoline RC cars have a more complex design and hence have more body parts than the electric ones. If you get from a promising brand, electric RC cars do not require much maintenance. You will need to get the tires changed once in a while if you are into speed racing. The chassis and the servo also demand repair after some heavy rides.

Out of all these three, Nitro RC cars need to be maintained the most. You will have to spend money on repairing time-to-tome. Depending on the usage, things that will be a burden on your pocket are tires, drive pulleys, shocks, glow plugs, etc. The biggest maintenance cost you will have to bear is getting your engine repaired or even buying a new one at times.

Most of the above repairs are needed in gasoline cars too. You need to examine differentials, spark plugs, drive pulleys, ball bearings, and the tires as well. The better thing about these cars is – their engine requires lower maintenance than the Nitro RC car’s engine.

Getting a specific type of RC car largely depend on the type of vehicle you want and the purpose you need to achieve. Electric RC cars require low maintenance and are great for uninterrupted fun. The Nitro RC cars are great for stability and loud racing experience but need a skilled person as they can break down frequently.

Gasoline RC cars have their own advantages as they are used in races of long duration. They are better than the Nitro RC cars in terms of maintenance and fuel mileage. Also, their big size can be an attraction point for many.

Parts of LED TV and Their Functionality – TV Components